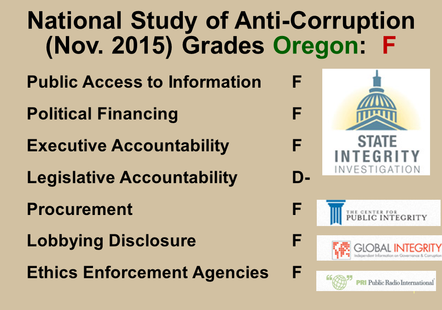 Oregon is almost unique in the United States.  There are only 5 other states which have no limitations on campaign contributions.

The State Integrity Investigation of the Center for Public Integrity in November 2015 graded Oregon an overall "F" in systems to avoid government corruption.  Oregon was ranked 49th worst out of 50 states in control of "Political Financing," beating only Mississippi on that score.

At the urging of the Oregon Progressive Party, Alliance for Democracy, Represent.us Portland Chapter and many other groups and people, the Multnomah County Charter Review Committee on July 6 voted to send to the November 2016 ballot a highly effective campaign finance reform Measure.  The Multnomah County Commission confirmed that decision on August 4.

The Measure would adopt limits on political campaign contributions, which are in place for 90% of local governments in the United States.  The limits are the same as those adopted by voters in Seattle in 2015:  candidates may not receive contributions larger than $500 per
person.

The Measure applies to candidte campaigns for all Multnomah County offices.  It:
More details on the major provisions page.

Elections get more expensive all the time, especially so following the US Supreme Court's Citizens United decision in January 2010.  That decision freed corporations to spend unlimited money to promote or oppose candidates, as long as those efforts were "independent" of the candidate.  Past elections have shown that there is a wink in that -  those so-called independent expenditures are not truly independent.  But we are stuck with the court's decision.....unless we challenge it and try to create the system we want.  Citizens United cannot be challenged, unless and until the people somewhere adopt limits on independent expenditures.  The Measure does that.