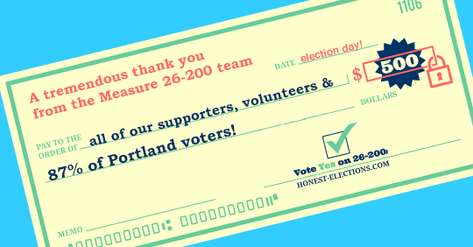 Thanks to You for Honest Elections Portland's 87% Victory

Thank you for anything and everything you did to help with election cycle. Whether it was making social media posts, talking to your friends and family members to get them to vote, helping gather the 55,000 signatures to qualify the Honest Elections measure for the ballot, or volunteering to drop literature at the doors: We see you and we THANK YOU! 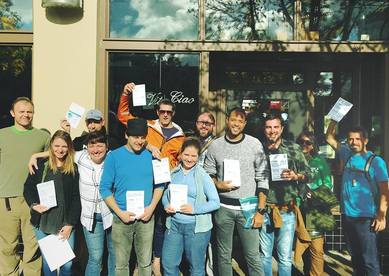 We’re taking our somewhat popular campaign finance reform measures to the rest of Oregon!  We intend to go statewide in 2020 and also pass ballot measures in other cities, counties, and districts.  The people clearly want limits on campaign contributions and want to require that political ads identify their funders!

Governor Brown states she intends to strongly pursue meaningful campaign finance reform after surviving the most expensive gubernatorial race in Oregon’s history (nearly $40 million spent by her campaign and Knute Buehler's--double the previous spending record).  We need to hold her to that commitment by proving Oregonians will demand no less at the ballot box.

We look forward to continuing to work with all of you to get BIG money out of Oregon Elections.

For now, let’s all take a moment to celebrate–you worked hard and you deserve it!
55,000 Signatures Submitted for Portland Campaign Finance Reform Measure

The submittal was delayed due to the 2-hour evacuation of City Hall due to a fire.

The required number of valid signatures of Portland registered voters is 34,156.

This measure is like Multnomah County Measure 26-184 (2016), which amended the Multnomah County Charter to limit political campaign contributions and expenditures in candidate elections and to require that political ads prominently disclose their actual major funders (not just nice-sounding names of committees or nonprofit corporations).

"Voters approved that measure with an 89% `yes' vote in 2016, and we will do the same in Portland in November 2018," said organizer and Portland attorney Jason Kafoury.

The voters of Multnomah County enacted Measure 26-184 by a margin of 89% "yes" to 11% "no" at the November 2016 election.  The voters inside Portland were 90% "yes" on the measure.  So we are offering Portland voters the opportunity to adopt a very similar measure to amend the City Charter to get big money out of Portland politics.